The Calligra team is proud and pleased to announce the alpha release of version 2.6 of the Calligra Suite. This version is a preview of what will come in the final version of Calligra 2.6 that will be announced in december this year.

As usual, Calligra is developing very fast and there are a lot of new features to be announced. This is also the second feature update after the initial release of Calligra in April this year which means that we are approaching some form of maturity.The team will use a significant part of the remaining time until the release to polish away usability problems and visual glitches.

Calligra 2.6 beta will be announced in approximately a month. After this there will only be bugfixes on the release branch until the final release in December. Note that all new features are still work in progress until the beta release.

As usual the release has a number of new or improved features. The most important of them will be highlighted here. There are still a few important improvements that we expect for the 2.6 beta and final versions but which were not ready in time for this alpha.

Calligra Author is a new member of the growing Calligra application family. The application was announced just after the release of Calligra 2.5 with the following description:

The application will support a writer in the process of creating an eBook from concept to publication. We have two user categories in particular in mind:

The first version of Calligra Author will be very similar to Calligra Words since the new features of Author are also adopted by Words. Future releases may deviate more. 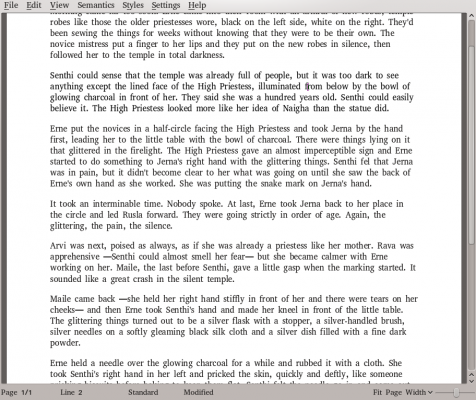 Screenshot of Calligra Author using a very early version of the so-called “Distraction Free Mode”. Content is from Irina Rempts novel Terms of Service which can be found at leebre.org.[/caption]

For the productivity part of the suite (word processor, spreadsheet, and presentation program) the target user of version 2.6 is still the student or academic user. This version has a number of new features that will make it more suitable for these users.

Sheets, the spreadsheet application, has a new function optimizer - also known as a Solver - and all standard scripts are now localizable.

Stage, the presentation program, has a new animation framework that lets the user create and manipulate animations in slideshows.

Kexi, the visual database creator, has new support for user data storage, in improved CSV import and export and improved table views. Detailed list of changes for Kexi is available.

Krita, the drawing application, has new support for OpenColorIO, which makes it suitable for use in the movie industry. It also has big speedups in many places, including the vc library and when painting using the new precision slider in the preset editor.

There is also improvements in painting HDR images and integration into a GFX workflow as well as support for the latest OpenRaster standard and many bugfixes. 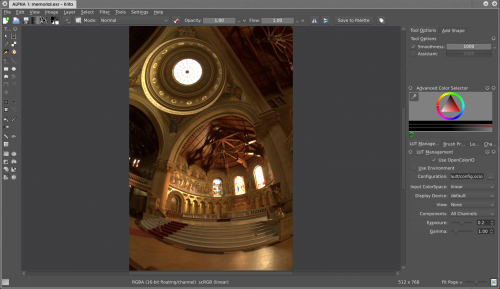 There are two new filters in Calligra 2.6alpha:

The architecture of the Calligra Suite lets the applications share much of the functionality of the suite with each other. Many common parts have seen improvements since the release of 2.5. Here are a few of them..

Charts have a number of improvements for fine tuning the formatting. Examples include fonts for titles and labels and markers for datasets.

Mathematical formulas have an improved rendering.

Calligra Active, the version for tablets and smartphones, has several improvements: there is a new slide chooser for presentations, slides can be changed by flicking the device, page switching improvements for text documents and improved start up sequences including a new splash screen.

Calligra Active also takes advantage of the improvements in the common parts of Calligra: the libraries and plugins.

The source code of the snapshot is available for download: calligra-2.5.90.tar.bz2. As far as we are aware, the following distributions package Calligra 2.6alpha. This information will be updated when we get more details.

Fedora packages are available in the rawhide development repo (http://fedoraproject.org/wiki/Rawhide), and unofficial builds are available for prior releases from kde-unstable repo at http://kde-redhat.sourceforge.net/ .

Windows packages will be available from KO GmbH. For download of Windows binaries, use the download page. We would welcome volunteers who want to build and publish packages for the Calligra Suite on OSX.

Calligra, comprising the Calligra Suite and Calligra Active, is part of the applications from the KDE community. See more information at the website http://www.calligra.org/.