The Calligra team is proud and pleased to announce the beta release of version 2.5 of the Calligra Suite. This means that the calligra/2.5 branch has been created and there are no further features allowed until the real release approximately a month from now.

As expected, this release has a number of new features that were not ready in time for the alpha release. Here are some of the most important ones:

Sheets, the spreadsheet application has a new stand-alone docker for the cell editor. In Version 2.4 of Calligra Sheets, the cell editor was a standard tool docker, which meant that most people kept it in the side bar. Some users thought this was a disadvantage because the editor area was too narrow. In version 2.5 the cell editor is now contained in its own dock window which means that it can be placed above the work area as in other spreadsheets or even be torn off into its own window. 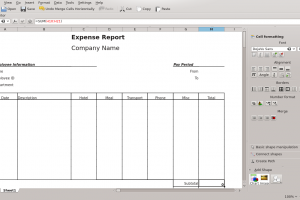 An improvement common to all the applications is a new system for connecting shapes. This is used for instance when creating diagrams for flowcharts or organizational charts. The new connectors in Calligra 2.5 are both more powerful and easier to use than those in version 2.4.

Krita, the painting application, has an improved canvas handling subsystem. This means that rotation and scaling of the canvas can now be done when any other tool is active. This should improve the interaction for artists that make much use of the canvas manipulation feature.

The source code of the snapshot is available for download: calligra-2.4.91.tar.bz2. Alternatively, you can download binaries for many Linux distributions and windows.