The Calligra team is proud and pleased to announce the alpha release of version 2.5 of the Calligra Suite. Since the first release of Calligra the team has worked using a new development model where new features are only introduced into the main sources (known as “master”) after a feature or bugfix is “finished” in some sense. The actual development is done in a branch which is kept separate from the main sources while the code is still immature.

This allows us to use shorter development cycles and shorter alpha and beta periods since the master branch should in principle be releasable at any time. However, all software contains bugs and in 3 weeks we will announce the 2.5beta version. This also marks the hard feature freeze for version 2.5. After this there will only be bugfixes on the release branch until the final release in July. 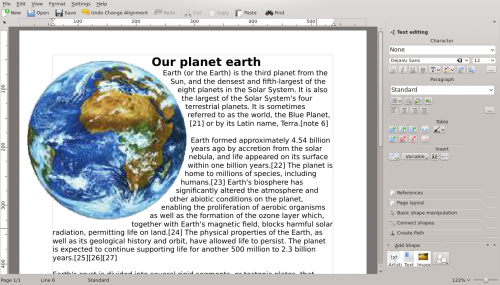 As usual the release has a number of new or improved features. The most important of them will be highlighted here. There are still a few important improvements that we expect for the 2.5 beta and final versions but which were not ready in time for this alpha.

For the productivity part of the suite (word processor, spreadsheet, and presentation program) the target user of version 2.5 is still the student or academic user. This version has a number of new features that will make it more suitable for these users.

Words, the word processor, has among other things improved support for editing of tables, tight run-around of text around images, manipulation of table borders, and dragging of text. There are also a number of new features in the bibliography tools.

Stage, the presentation program, has a number of usability improvements.

Flow, the diagram applicatio,n has support for new stencils in odf custom shapes.

Braindump, the note taking application, has no new features in itself but will take advantage of all the improvements in shared shapes and plugins.

There are three new filters in Calligra 2.5alpha:

The architecture of the Calligra Suite lets the applications share much of the functionality of the suite with each other. Many common parts have seen improvements since the release of 2.4. Here are a few of them.

Charts have a number of improvements and work much better in general.

The common parts of Calligra was the subject of a week-long bug fixing sprint where over 100 bugs was closed. This means that the overall quality of the shared plugins is improved.

The source code of the snapshot is available for download: calligra-2.4.90.tar.bz2

Fedora packages are available in the rawhide development repo (http://fedoraproject.org/wiki/Rawhide), and unofficial builds are available for prior releases from kde-unstable repo at http://kde-redhat.sourceforge.net/ .

Windows packages will be available from KO GmbH. For download of Windows binaries, use the download page. We would welcome volunteers who want to build and publish packages for the Calligra Suite on OSX.