The Calligra team is very proud to announce the first release ever of the Calligra Project, version 2.4.0. This is the end of a very long journey that started over a year ago and has now lead up to the first stable release of Calligra. 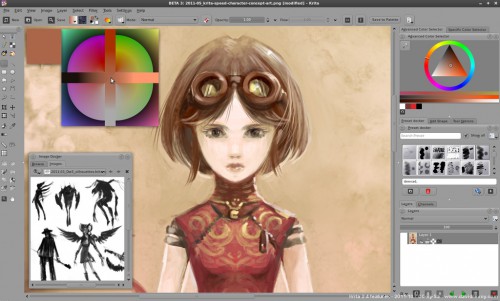 There are also versions for mobile platforms and these have their own user interfaces suited for touch computing. This release contains two such user interfaces:

Several companies have used Calligra as a base for their own office solution. Nokia uses the Calligra Office engine in the Documents application on Harmattan Meego. Every N9 user already has Calligra installed on their phone!

Calligra uses the Open Document Format (ODF) as its main file format which makes it compatible with most other office applications including OpenOffice.org, LibreOffice and Microsoft Office. It can also import the native file formats of Microsoft Office with great accuracy, in many cases the best you can find.

The applications in the Calligra Suite shares some common UI concepts that gives it a modern look better suited for the wide screens of today. One of them is that most formatting is done using dockers which are placed at the side of the windows instead of on the top. This makes more space available for the actual document contents and avoids opening dialogs on top of it. If the user chooses, s/he can rearrange the placement of the dockers around the document area or even tear loose them and let them float freely. The arrangement is saved and reused the next time Calligra is opened. 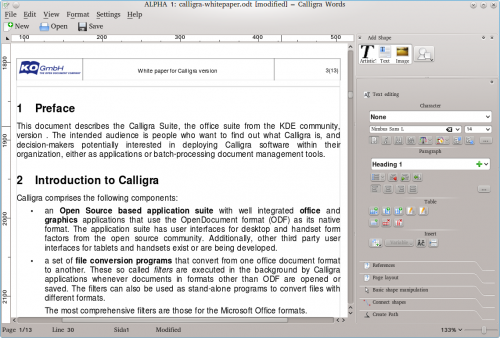 This is the first release of Calligra so maybe talking about news is not the thing to do. However, Calligra is a continuation of the old KOffice project and it may be interesting for KOffice users to know what they will get. Here are some highlights:

The source code of this version is available for download here: calligra-2.4.0.tar.bz2. Also many binary packages are available for various operating systems and distributions. This release is packaged for Windows by KO GmbH, and you can find it on their download page.

We would welcome volunteers who want to build the Calligra Suite on OSX.

About the Calligra Project

Calligra is a KDE community project. Learn more at http://www.calligra.org/ and http://www.kde.org/ .